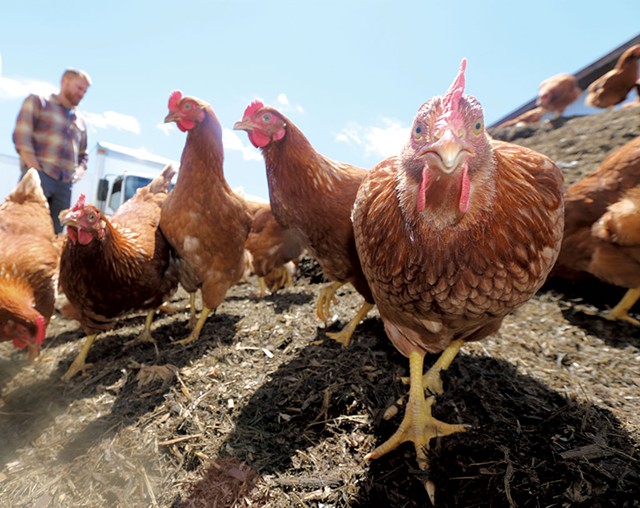 Rebecca Sheppard of Montpelier pulled her Volvo sedan into the driveway of Vermont Compost last week and popped the trunk. Inside were several five-gallon plastic buckets filled with rotting food scraps that Sheppard had dutifully separated from her trash, as the state has required since July 1, 2020.

She’d been storing the dregs in the buckets for months, so when she pried off the tops and tipped the fetid slop into one of the company’s 50-gallon totes, she winced at the noxious plume.

And yet she’s made this putrid pilgrimage for years, willing to go the extra mile to reduce her waste and return her food leftovers to the land from whence they came.

“I give them my food scraps, then I buy it back from them as compost,” Sheppard said. “It’s a great business.”

The Montpelier company is one of a handful that combines composting with raising chickens. Founded by compost pioneer Karl Hammer in 1992, the business now has about 800 hens feeding exclusively on the food scraps they scratch out of the huge piles of steaming compost.

The company has struggled with uncertainty in recent years, in part because of a regulatory quagmire created by disagreements over whether such operations are farms or dumps. But hope is on the horizon: After a long legislative battle, lawmakers carved out an exemption for such hybrid entities; Gov. Phil Scott signed S.102 last month.

A few years ago, Vermonters and businesses in the state were sending nearly 80,000 tons of food waste annually to landfills, about 20 percent of their total trash. After the ban, the volume of separated, compostable food waste collected at transfer stations in the state spiked as more people did their diversion duty. In Stowe, for example, the Lamoille County transfer station took in nine tons of food waste in the quarter just before the ban went into effect — then 29 tons in the quarter immediately after, Kelly said.

Statewide totals have yet to be calculated, but similar increases at other locations suggest Vermonters are getting the message that food waste is not garbage. Instead, said Kelly, it’s a valuable resource that can be used to feed animals, make compost and generate energy. “The increases are remarkable,” Kelly said. 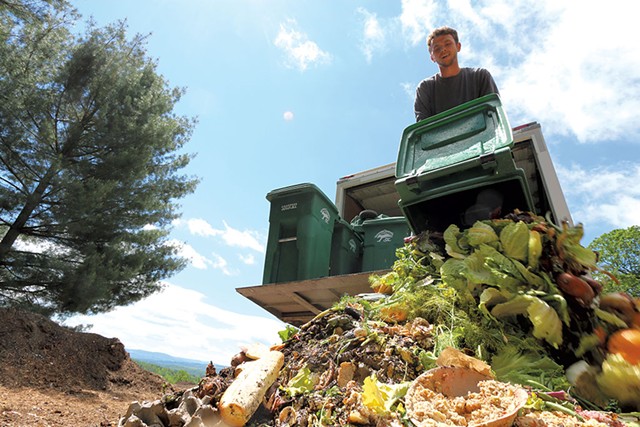 Outfits such as Vermont Compost have yet to benefit from the surge in scraps, however, in part because of past uncertainty about regulations governing their business. The hybrid nature of the operation — a commercial compost producer and an organic egg farm — landed it in a gray area between the Agency of Agriculture, Food and Markets, which regulates farming, and the Agency of Natural Resources, which oversees solid waste facilities such as dumps and recycling centers.

The questions came to a head in 2018, when the agriculture agency, citing changes in federal food safety laws, decided that feeding food scraps to animals wasn’t strictly farming. That put the regulatory decision to the Department of Environmental Conservation, which operates within the Agency of Natural Resources and has stricter rules about water quality, odor and pest control for waste operations than for farms.

“It was just, ‘Are you a farm? Are you a solid waste facility?’ And a lot of places were both,” said Cary Giguere, director of public health and resource management for the ag agency.

Some composters perceived the jurisdictional overlap as an existential threat to their businesses. They formed a group called Poultry Farmers for Compost Foraging and lobbied lawmakers to treat them as farmers, not waste dumps.

The protracted legislative battle cast a pall over virtually everything Vermont Compost did, from how many chickens it could raise to whether it should make key investments in equipment or buildings.

“There were a couple times where we as a company asked ourselves whether we could even be accepting food residuals anymore,” said Kurt Ericksen, Vermont Compost’s general manager. “It was like, ‘How do we run a business without knowing this stuff?'”

The company decided to soldier on, investing in a new henhouse and a huge hoop-house structure to keep water off the foraging areas.

Driving around the property in a mud-encrusted golf cart recently, Ericksen showed off these and other investments while describing how nerve-racking it had been to face losing a source of free chicken feed and a key compost ingredient.

The food scraps from local restaurants and grocers, when mixed with manure and spoiled silage, create a bounty of bugs, microbes and fungi, improving the chickens’ overall health and egg quality, he said. The chickens, meanwhile, add their own poop to the piles, helping to create the kind of rich soil amendments and composts that have made the company well-known in New England organic farming and gardening circles. 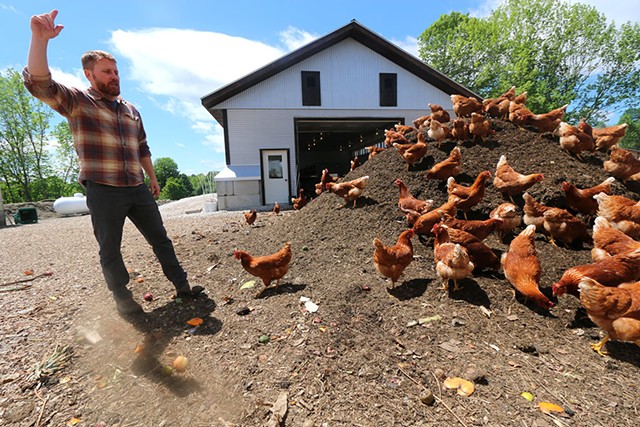 Removing food scraps from the equation would have required the company to augment its chicken feed with grain, adding a cost. More importantly, it would have prevented the company from putting the waste from agricultural products back into the soil, which closes the nutrient loop.

“When people ask me what I do, I say I manage regional nutrient cycles,” Ericksen said with a boyish grin.

A few years ago, Vermont Compost was processing more than 2,000 cubic yards of food scraps annually. After its hauling partner starting taking scraps elsewhere, the company was forced to establish its own collection routes in Washington County. Today it collects just a fraction of what it once did, about 200 cubic yards a year. Ericksen hopes to grow back to 1,000 yards or more, he said.

That will now be possible because he and others convinced lawmakers that their work is, in fact, farming and should be treated as such.

The new law allows farms to import up to 2,000 cubic yards of food waste annually as long as they use at least half of the compost on-site — for example, applying it to fields or using it to start vegetables — or if they are defined as small farms that raise poultry.

Ericksen said he doesn’t feel he’s won a major victory so much as he’s had a cloud lifted. He credits the advocacy organization Rural Vermont — and Giguere, who he said understood the benefits of clarifying the issue — with helping lawmakers see the light.

Chicken-foraging was the highlight of the bill, but Giguere said a more consequential piece gives the agriculture agency broad authority to regulate other “soil inputs.” This includes biosolids, an end product of wastewater treatment plants that is spread on fields as fertilizer.

These materials often contain trace amounts of PFAS, the so-called “forever chemicals” that have become ubiquitous in the environment. The bill contains money for sampling agricultural soils, and the agency plans to adopt rules for spreading biosolids, he said.

On another hot issue, the bill charges the ag agency with tackling microplastics in soil. Compost operators are concerned that large volumes of food waste that can no longer go to landfills will be sent to “depacking” facilities that use large machines to separate food from its packaging. Critics worry that those facilities, such as the Casella Waste Systems site in Williston, smash the packaging and leave plastic bits in the waste.

The resulting slurry is pumped into massive digesters that mix the food waste with manure and capture the methane for use as renewable gas. The material left after the digester does its work can be applied to the soil, and some people worry that it will contain tiny plastic fragments from the mashing process.

“If we have microplastics in that material, it would be simply criminal to be putting it on our farmland,” Tom Gilbert of Black Dirt Farm in Stannard told lawmakers in April.

Creating new rules to address such seemingly intractable environmental challenges may seem like a tall order. But Giguere said the state’s small size and forward-thinking lawmakers and administration make it uniquely suited to “deal with issues that the rest of the country doesn’t even know they have.”