After decades of improving my garden soil, I have an infestation of Asian jumping worms. They can eat all the organic material in the soil, depleting it terribly. These foreign invaders multiply more quickly than our common worms, outcompeting them. Everything I have read about them says they are bad news for gardeners.

Scientists are working on organic solutions to the Asian jumping worm problem. I was able to phone Brad Herrick, a researcher at the University of Wisconsin who has been studying them for years. He explained that although they came to the United States nearly a hundred years ago, the worms are spreading rapidly, now infesting 37 states. Their worst impact may be in the forest: they eat dead leaves and forest duff, potentially creating a soil devoid of the organic matter that nourishes native wildflowers and trees. The soil can become sterile.

To see if you have them, start at a shady, mulched bed — that is where they like it best. Pull back leaves or mulch on your soil. The worms are surface feeders, living in the top inch or two of the soil, and readily seen on the soil surface. Touch one, and it moves fast — quite a contrast to our relatively sluggish ordinary worms. The infested areas often look as though coffee grounds are spilled on the soil — which are their castings, or excrement.

The clitellum that produces the egg sacs or cocoons is a whitish band near the head of the worm. This contrasts with our common worms, which have a reddish-brown clitellum that is usually a bit raised. 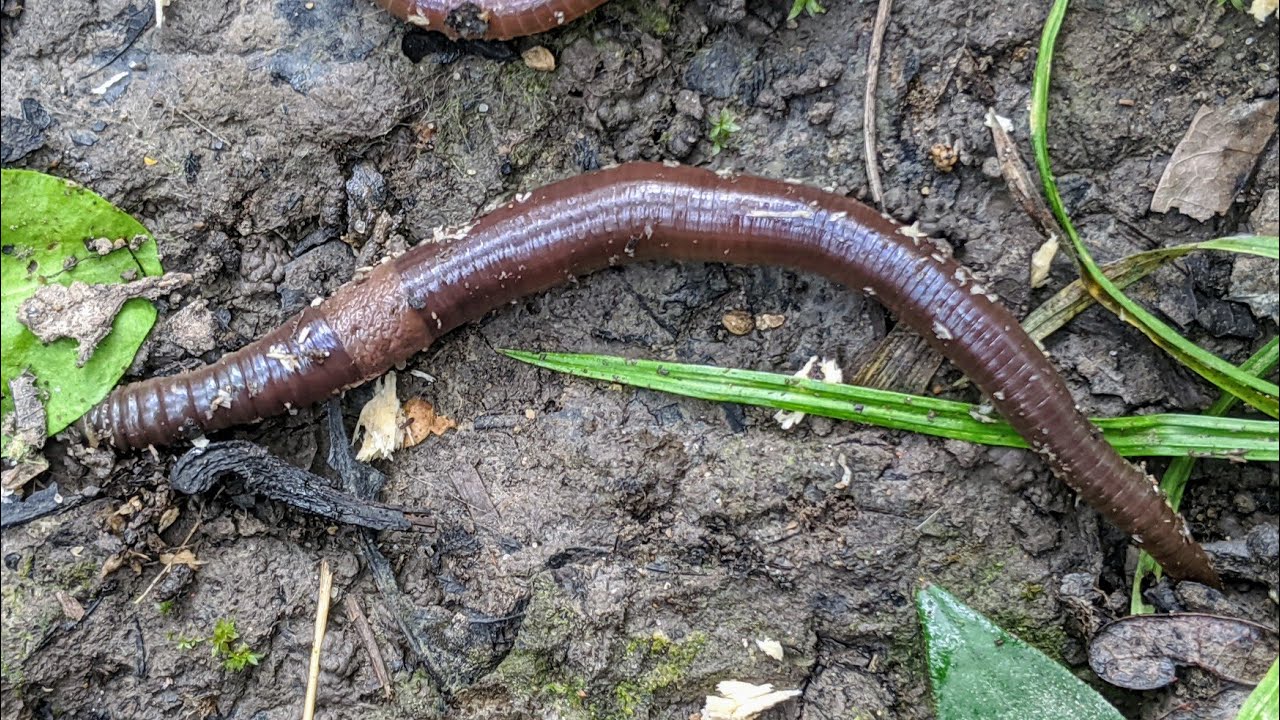 Herrick explained that, unlike the earthworms we know and love, these guys can reproduce asexually, so even one worm can start an infestation. But they also spread when the cocoons, which sit on the soil surface, are washed away by rains. This allows them to expand their territory quickly, especially on hillsides.

I don’t know how I got them. They may have arrived when I bought plants for a new flower bed. I know my source of compost and know it has been heated sufficiently to kill all the weed seeds, so that would have killed any cocoons, too. And I see none of the worms in my purchased compost pile. But I had work done on my septic system, and soil was brought in.

According to Herrick, freezing temperatures kill all the adult worms each winter. Unfortunately, it does not kill the eggs, which overwinter and start the cycle again. The eggs hatch once the soil temperature reaches 50 degrees — perhaps in April or May. He said it takes 70 to 90 days to reach maturity, at which point they start producing eggs. They continue to produce eggs from late June until frost.

If you have a new infestation you can try removing them by hand. Scientists often use a solution of yellow mustard powder in water to get worms to come to the surface, one-third cup per gallon of water. But if you have a large area, that might not be practical. The best time to do this is in early summer before new worms have reached maturity.

Herrick said you can heat the soil to kill the worms by solarizing it with clear plastic. Worms — and castings — will self-destruct at 104 degrees for three days, perhaps less. Unfortunately, that will not work in forests or shady beds, which is where I have them.

The worms can live in sunny beds if they are mulched. In fact, Herrick told me, the worms have an enzyme that allows them to eat wood mulch. I wonder if mulching with peastone or small gravel instead of bark mulch or leaves might help to reduce the problem? If they run out of food, they may well die out. That theory has not been tested, and you may not like the look of a stone mulch. If you do this, please let me know if it helps.

My worm problem, so far, exists only in one large shady area. Here’s my plan: after frost I will rake off leaves and mulch (and collect and destroy any worms I see). Worms are usually within a inch or two of the surface. I will treat those leaves as toxic waste, as they probably will have cocoons in them, which I don’t want to get into my compost pile.

Hopefully, I can burn my rakings in the driveway to destroy the leaves and cocoons. Then I will cut back all my perennials and go over the area with a flame weeder. This is a torch attached to an eight-gallon propane tank that sends out a big flame. That should burn up the cocoons on the soil surface. Flame weeders are available from Johnny’s Selected Seeds or Fedco seeds.

Herrick told me of a product, BotaniGard, which contains a fungus that is listed for use to kill the worms. However, in a University of Vermont study I read, it is only about 70% effective in a lab setting. That is not good enough for me, especially since even a solitary worm can produce viable eggs. And it sells online for $90 a pound.

When buying nursery stock, look for a coffee ground appearance on the surface of the pot, and when removing the root ball, look for worms. If you see either, do not plant it, and report the problem to the seller. Check purchased compost for worms, too. Clean your tools and shoes if working in beds with worms — the egg cocoons are tiny and not visible to the naked eye.

We will get through this. Remember when we were told impatiens plants all carried a terrible fungus and we would never be able to grow them again? Didn’t happen. This is more serious, but I do believe we will be able to manage it.

Henry Homeyer’s blog appears twice a week at gardening-guy.com. Write to him at P.O. Box 364, Cornish Flat, N.H. 03746. Please include a self-addressed, stamped envelope if you wish a mailed response. Or email henry.homeyer@comcast.net.